"Dark, mesmeric, uplifting and danceable; you won’t hear anything else like it." ★★★★ Evening Standard

The Old Market
11a Upper Market Street
Hove,
BN3 1AS

Ariwo’s sets are arresting affairs, holding audience’s hostage to their hypnotic grooves as they invite them into a new sound world.

In Yoruba the word Ariwo means “noise”, which captures the band’s desire to combine traditional rhythms into a live electronic performance, challenging perceptions of ancestral music, and connecting diverse cultures from around the world.

“A soundscape that was paralysing & moving all at once” Pitchfork

Listen to the album teaser here

HAMMADI VALDES
Cuban ‘percussion virtuoso’ (Time Out), HAMMADI VALDES, was Musical Director for Carlos Acosta for 10 years; has won a Latin Grammy for his work with Chucho Valdes; has toured with Irakere; and played with the London Philharmonic, BJ Cole & Charles Hazlewood amongst others.

CAMILLA GEORGE
MOBO-nominated, Nigerian born saxophonist and star of the award-winning group Jazz Jamaica. Camilla’s love of fusing African and Western Music to make her own unique style is a key reason why she is a firm fixture on the new London Jazz scene alongside peers such as Nubya Garcia and Shabaka Hutchings. www.camillageorge.com

The Will Gregory Moog Ensemble - Paris
Days Off festival 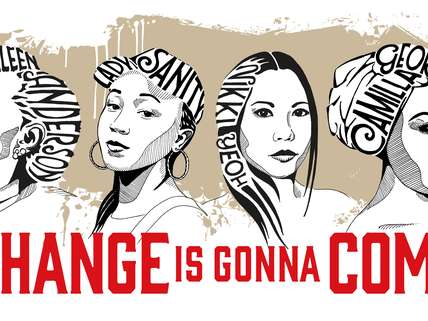 A Change Is Gonna Come 2019
Music for Human Rights