"Her voice is a thing of beauty" - The Times

Letters I Haven’t Written is an ambitious new project by award-winning singer, composer and multi-instrumentalist, Gwyneth Herbert. With songs from her acclaimed new album at its heart, Gwyn and her band collaborate with an extraordinary creative team, video designer Will Duke, director Susannah Tresilian and designer Tom Rogers, to explore how we communicate, and find more meaningful connections with ourselves and the world.

“Letters I Haven’t Written is by turns moving, thrilling and entrancing” **** Jazzwise

Co-commissioned by Snape Maltings and OCM

Composer, lyricist, vocalist and multi-instrumentalist, Gwyneth Herbert draws on a wide range of influences from the worlds of jazz, folk, contemporary classical music and storytelling. She has released six critically acclaimed albums (including the first Blue Note UK release in 30 years) and toured the world with her band. Herbert has also forged a successful career across other disciplines including the title role in the Bristol Old Vic theatre's acclaimed production of The Snow Queen (for which she was also composer, lyricist and musical director), major new commissions for London Sinfonietta, Mahogany Opera, Aldeburgh Music and The Palace That Joan Built for Art on the Underground with artist Mel Brimfield, and co-creator of five musicals. www.gwynethherbert.com

Will Duke is a video artist, filmmaker and projection designer. As a visual artist his video work is part of museum and gallery collections in Scotland, Norway and at the Museum of Modern Art in New York. He collaborates closely with writers, directors, choreographers and other designers to realise their visions for each production, bridging the technical and aesthetic elements of a production through a specialised working knowledge of AV delivery systems and a strong, unique artistic vision. Recent collaborators include Simon McBurney (The Encounter), John Fulljames, Melanie Wilson, Natalie Abrahami, non zero one, Fevered Sleep, and Unlimited Theatre. www.willduke.net

Susannah Tresilian is a theatre director. Focussing predominantly on new works, she specialises in championing gender equality on and offstage in her productions at the National Theatre, Nottingham Playhouse, Salisbury Playhouse, York Theatre Royal, Hampstead Theatre etc. Her work has taken her all over the world directing plays in various languages in Italy, France, Cyprus, Croatia, Norway and Belarus. She makes radio drama for the BBC, and her BBC Radio 4 radio play The Music Lesson starring Fiona Shaw was a finalist for Best Original Audio Drama for the 2018 BBC Radio Drama Awards. She is the founder of Ariadne, a global collective of women who make social and political theatre to inspire change. www.susannahtresilian.com

Tom Rogers was a Linbury Prize finalist in 2005 for his work with Wayne MacGregor for Random Dance at Sadler’s Wells. He was also short listed for the Jocelyn Herbert Award. He was the winner of Backstage Pass award 2013-14 for Best set design for My Judy Garland Life at Nottingham Playhouse. Recent work includes On the Habit of Oneself at Sadlers Wells, Goat for Rambert, Echo’s End at Salisbury Playhouse. 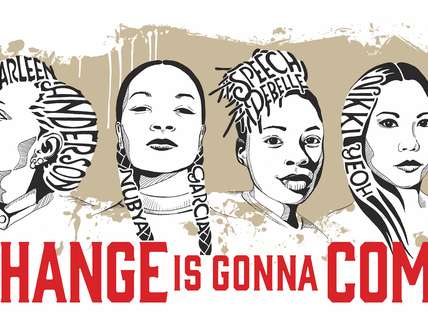 A Change Is Gonna Come
Music for Human Rights