How does living by the sea make you feel? 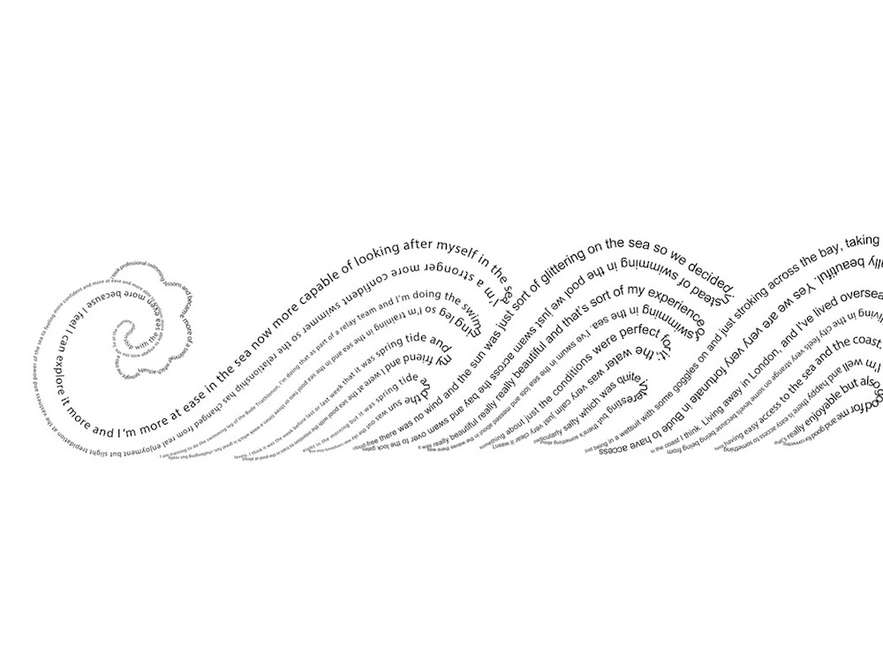 At REFLECT BUDE, step inside the Swirl beach hut to hear new interactive and generative sound installation by Cornish artists Timothy Crowley and Kate Ogley, created in response to the location and recorded experiences of those living in Bude and North Cornwall. Here Kate tells us about their experience interviewing and recording people for the project.

It has been a privilege for us to meet everyone and discover what it means for each person to live close to the sea and the coastline. We have interviewed people from many walks of life. The relationship with the sea for some participants spans an entire lifetime, for others it is one they returned to later in life or in some cases it’s a relationship that has been formed for the first time more recently.

Beautiful and powerful images of the sea have emerged from the interviews. For one interviewee the sea was likened to an ‘open door’; an invitation or perhaps a portal to another place or dimension. For another participant the sea was felt as an unbroken link between far away places bringing consolation and a feeling of connection with loved ones when overseas.

The sea was also experienced as a darker place of potential danger; large waves that might snatch young children away without warning, and a place where one might simply vanish and not come back. And yet for several people the sea’s uncaring and impervious nature offers them a great sense of freedom; the sea being an entity with no expectations or judgement. Reflecting on the interviews it became apparent that for many the sea embodied great contradictions.

For several participants the sounds of the surf heard at night, had almost imperceptively infiltrated into their consciousness over the years; becoming part of who they are. Some spoke of the comfort and reassurance this gave them. A sound that in some cases was ‘felt’ most keenly in its absence when they moved away from the sea.

Several people spoke of the sound of the chaffing pebbles in the undertow when walking on the beach as one that they associated most strongly with the sea. One participant used alot of ’s’ sounding words , swimming, sloshing, surfing……. sounding a little like the sea itself.

Encounters with the sea are woven into the participants daily lives and in all cases these encounters give them something vital. The sea and coastline was revealed as a place that inspires inner reflection, as well as offering individuals solace, sanctuary or respite from other aspects of life.

Perhaps more surprisingly we discovered that the sea also provides some of the same inteviewees with a strong sense of community, and the chance to be involved with a variety of clubs and groups often offering immersive and exhilarating encounters with the ocean. Or a place to simply gather and have fun with family or friends. We were very struck by the powerful sense of belonging that many of the interviewees felt towards the sea as well as a sense of great pride in their surroundings.

Find out more and BOOK TICKETS