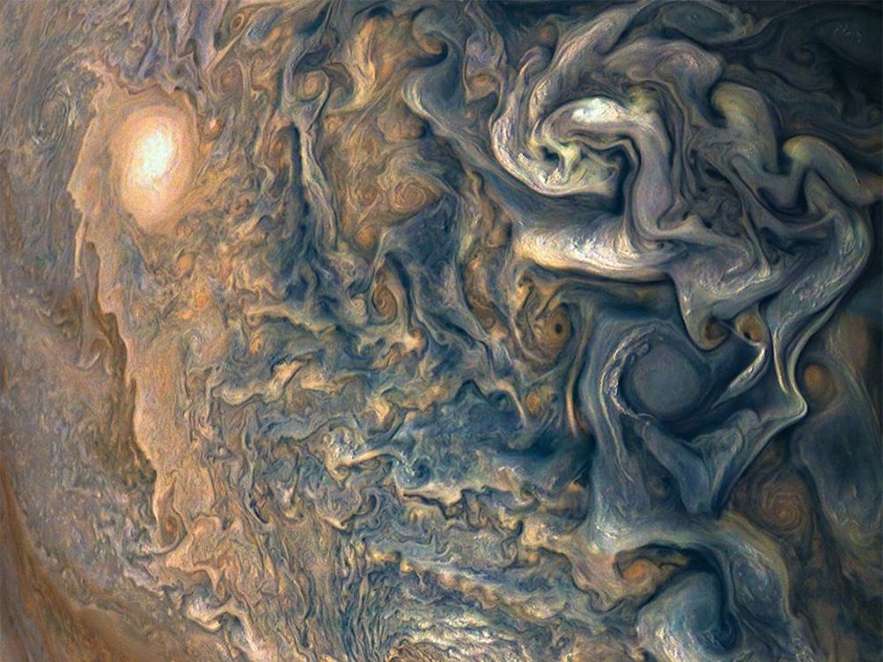 Richard creates a sound world inspired by time-lapse videos of the auroras in Jupiter’s atmosphere, as well as images of the swirling clouds and rushing winds. He also makes a feature of the 4 Galilean moons of Jupiter, assigning one to each of the string quartet instruments.

British composer Richard Bullen studied at the Royal Academy of Music with David Sawer, graduating with a PhD in 2015. His works, which have been described as 'audacious' and 'astounding', often make creative use of the performance space to heighten perception of sound and thrill the senses. He has worked with several leading new music ensembles and orchestras including LSO, London Sinfonietta, BCMG, Orkest de Ereprijs and Psappha. His music has been performed across three continents from New York to Tokyo, and broadcast on BBC radio. He is a visiting lecturer in composition at the junior departments of Trinity Laban and the Royal College of Music. His awards include a 2011 BASCA British Composer Award. www.composersedition.com

Dr. Leigh Fletcher. Royal Society University Research Fellow (URF) and Associate Professor in Planetary Sciences at the University of Leicester specialising in the exploration of planetary weather and climate using Earth-based observatories and visiting spacecraft. He earned a Natural Science degree from Cambridge, a PhD in Planetary Physics from Oxford, and has since worked as a NASA fellow at the Jet Propulsion Laboratory and as a Research Fellow at Oxford. He was the recipient of the 2016 Harold C. Urey prize for outstanding achievements in planetary science by an early-career scientist, awarded by the Division for Planetary Sciences (DPS) of the American Astronomical Society. He is a co-investigator on the Cassini mission to Saturn, the JUICE mission to Jupiter, and a passionate advocate for future exploration of the distance Ice Giants. He currently leads a planetary atmospheres team at the University of Leicester, funded by the Royal Society, STFC, and the European Research Council. planetaryweather.blogspot.co.uk

1. Jupiter is the biggest planet in our Solar System – 11 Earths could fit across Jupiters equator

2. Jupiter has short days and very long years. 1 Jovian day is about 10 Earth hours. It takes around 12 Earth years to complete one obit of the Sun (a Jovian year)

3. Jupiter has 79 known moons. The four best known moons are Io, Europa, Ganymede, and Callisto. They were discovered by Galileo (and are known as the Galilean moons) and are among the largest satellites in the Solar System. Some of these moons may be the mostly likely places to support life (other than Earth) in the Solar System.

4. Jupiter’s Great Red Spot is a gigantic storm that has raged for over 100 years and is about twice the size of Earth.

5. Unlike the 4 inner-most planets in the Solar system, Jupiter is a Gas Giant, so has no rocky surface. Its atmosphere is mostly Hydrogen and Helium.