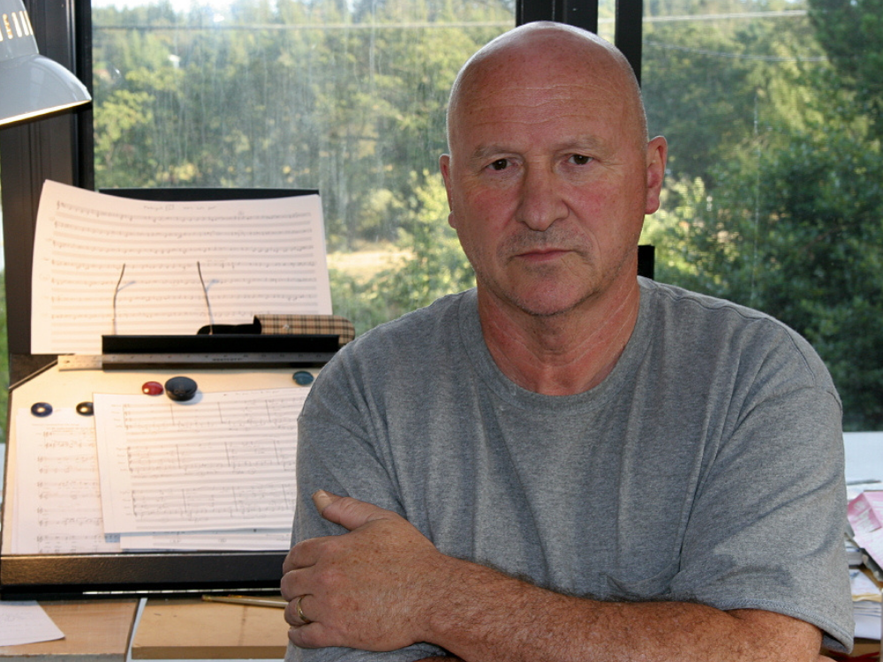 Working with Gavin Bryars is something of a dream come true. His recording of The Sinking of The Titanic in a French water tower came out around the time I had my first job after Uni. It’s got to be one of my all-time favourite recordings and left a lasting impression on me about how music and its context can transport the listener. I spoke to Gavin recently about his work including his new Sound UK and Junction, Goole commission Above Water. - Maija

Where do the two Sound UK commissions The Stopping Train and Above Water sit amongst your incredible breadth of artistic work?

I think they’re quite special. It brought me back to my hometown. Working on The Stopping Train was a project that brought me back to a place that I love. I had been back occasionally to visit family and for the football, but not very much. That project gave me a reason to go back there and think about the place a little bit and what it means. I have very fond memories of my life in Goole. I lived there uninterrupted until I went to University in Sheffield aged 18.

There’s a strangeness to the place, it’s completely flat, but there’s a very powerful central image of the river which really everything in Goole relates to. It has this powerful physical location which I am very fond of. Working on The Stopping Train and Above Water were very important pieces for me. Two of the most personal. They have a very special place in my output.

You’ve talked about your inspiration behind Above Water being your home town Goole and the late Eric Lawton, is there anything else that inspired the piece?

Oh lots. There’s lots of things about Goole that inspired it. Eric died a year ago, so I wanted to remember him as he epitomises the goodness of the people of Goole. There are the places I knew as a child. We lived next to the river and my dad kept goats. It was very homely. The docks where we used to play. All those spaces are very evocative to me. In a way I always feel that when I come back to visit Goole Town everything comes together there because Goole Town just hasn’t changed at all. It has a wonderful name for the football ground. It’s called the Victoria Pleasure Ground. That has the real feeling of Goole. Just the whole feeling of the place. For me Goole is special as it has a deep personal history.

You’ve written the song for local groups, Reads Warblers and Armthorpe Elmfield Brass Band. How did that inform the song?

I was aware that they were amateur musicians. In fact, brass band players from South Yorkshire and East Yorkshire are as good as professional players. They are fantastic players. The brass band world has its social context in the mining communities. The mines are only about 10 miles from Goole. One of my first jobs was in a working men’s club which was run by miners. That culture is very strong.

I knew that the singers were amateurs and most don’t read music. The way in which they perform, and their background and the kind of music that they know and would be able to sing helped to informed me. It’s a communal thing where everyone is helping each other. Everything was done in in discussion with Reads Warblers and Armthorpe Elmfield Brass Band.

Any lasting memories or impact on your practice?

There were things I learnt about the kind of ways in which you work together with people, the collaborations and the network of people involved. There were a lot of special connections such as meeting Terrence Smith for the first time – the youngest mayor in the country - 19 years old. He’s someone who personifies the character of Goole. A positive wholehearted person devoted to working for people there.

We’ve just launched an artist R&D programme, how important is it to support artists through R&D and commissioning?

I think it’s vital. I came through the hard way where I didn’t have that. I developed music by being a player. I studied music by writing it, so I learned on the job. In those days, we had no support of any kind. I think my development would have been a lot faster if I’d had support earlier on. But if you keep your feet on the ground, an open mind and a warm spirit you’ll go a long way.

You have the most amazing career. Is there anything that stands out for you that you are particularly proud of?

I don’t really take a lot of pride in any of it really. I would never push myself forward and say this is great. In fact, I remember working with my ensemble and after a new piece I’d say ‘Ahh I don’t want to do this one again’ and they would encourage and say ‘no, we like it we want to do it again’ but I had to be persuaded.

There are some pieces like Jesus’ Blood Never Failed Me Yet which is a very early piece. I’ve grown to respect this piece more and more. To do it in different contexts and realise what it can mean to many people. I’ve done it hundreds of times, and every time I start playing it and that voice starts unaccompanied I’m still touched by it. It’s 50 years since I first heard that voice and it still touches me.

I think a recent piece Native Hill ultimately meant a lot more to me than any others. It was a very big piece, about an hour long, 24 voices, very complicated. And it the middle of writing the whole thing my daughter’s partner died suddenly in the middle of the night while my daughter was 5 months pregnant. The day I finished this piece was the day the baby was born. The recording came out April 9th 2021. It has a lot of resonance.

I see them all as pretty much equal though. Some are larger scale, some involve more work, more research sometimes. Some take me to areas where I’m unfamiliar like Above Water and The Stopping Train.

Apart from this new recording, what are your other plans for 2021?

I do have a concert in Cambridge in July and some things later in the autumn. I have projects and commissions to write and will have some more ballets next year. Things will go on. Oddly enough after more than a year at home I have two concerts in June on the other side of the world - when I conduct in Tasmania!!!

What are your hopes for music and its audiences in a post pandemic world?

I don’t think anything will be the same again. I think there’s a greater respect for human fragility and greater discretion and care in the things you do. I think travelling less will become more of the norm. I think I would feel slightly uncomfortable travelling too much, I think I would cut that down like a lot of other people will do.

A Song for East Riding, Above Water by Gavin Bryars is now live. Listen here