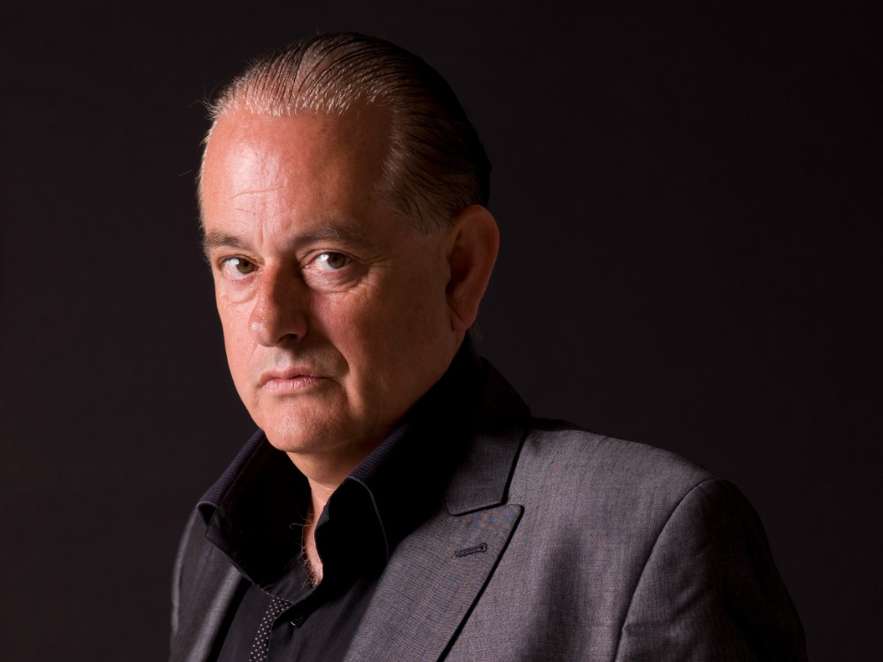 We worked with leading sound artist Martyn Ware (Heaven 17 / Illustrious / original Human League) in 2015 on our project ‘What Does the Sea Say?’.

As part of our 20th birthday year, celebrating 20 Artists for 20 Years, Majia recently caught up with Martyn for an interview over the new café table that is Zoom.

What’s been keeping you busy lately?

So many things. We’ve just submitted an application to do a huge soundscape at the Tower of London in 2022 – a celebration of the Queen’s 70th anniversary of succession to the throne. I won’t find out if I’ve got that for a couple of weeks yet, but I’m very excited about that.

I’m doing other soundscape work and I’m teaching in commercial music production, working with my students who are developing their careers and producing some of their stuff. I’ve sold my family home that I’ve been in for 30 years and I’m going to be buying a place in Venice. Everything’s changing which is good – I like change.

Hopefully we’ll be able to start performing live with Heaven 17 soon – that’s all coming up in the second half of this year, and the first half of next year. We’ve got loads of gigs lined up!

You’ve created some incredible projects with sound, from the Venice Biennale to the project we produced with you touring a beach hut around the UK. What do you think is so special about sound as an art form and its ability to engage people?

Sound appeals to a less mediated appreciation of art – it’s experiential. You don’t need any prior knowledge to respond to a piece of sound or music. And we’re doing it all the time. Whether we record it or not, our brain works at a very deep level to analyse the sound world around us.

We can beautify the world around us, particularly using immersive sound technologies, which trigger a sense of reality in people. We can create magic. I’ve now realised, my entire 40-year career in the music industry, in essence, boils down to creating magic. The less you know about the techniques involved, the more magical it appears.

You’ve been at the vanguard of pop music and sound art, what do you think they can learn from each other?

If you had asked me this question before I started Illustrious I would have said the two worlds are quite separate. But when I started taking stock of my career around 2000 when I formed Illustrious, I realised I was always interested in sound art but I’d just positioned it in a pop music framework. For example, when we started the Human League it was a mixture of esoteric and commercial influences, and that is what interests me. That space that appeals to people on a very popular level and how you can subvert that by doing things that are really imaginative and daring within that framework. Likewise, if you’re doing something that’s quite esoteric at its core, you can leverage the popular appreciation of music within that framework as well. That has guided my career to a large extent. Say for instance, I am producing a very popular artist like Tina Turner, there’s a limit to how much avantgarde you can get into that, but it can be used as a seasoning.

I work in that spectrum – between completely bonkers and really straightforward pop music. Although, saying that, I don’t think I’ve ever done anything that’s completely straight forward. I don’t see the sound art world being separate – if you see it as a couple of Venn diagrams I think they overlap by about 80% for me.

Do you have any special memories of ‘the beach hut’ project you did with Sound UK, What does the Sea Say?

Firstly, it was a really special project as a creator. I think it was special because it was aimed at everyone. It is to do with passers-by, dogs, kids, old people. I’m very much into sonic muralism. Muralism I’ve always loved because it’s art for the people, not art for galleries. And I’ve always felt that is where sound art works best – in the public realm.

Originally I was going to go around and record people but the fact that you’re thrusting a microphone into people’s faces changes the responses, so I thought why not take the artist out of it. Just leave it completely unmediated. Hence we had the automatic recording and no invigilation.

Honestly I think it’s one of the most interesting ideas I’ve worked on, whether or not it’s a beach hut, it could have been any form, but there’s something very magical about the beach hut.

As an iconic artist across sound and music and principal of Tileyard education, what advice would you give to sound artists starting out today?

Believe in yourself, believe in your art, be an artist. Think like an artist. Don’t think you’re failing all the time. Everybody fails, I fail on a weekly basis on various things and you have to ride disappointments.

I often say to students, the important thing is to have an interesting idea, and then you’re pretty likely to be able to find a methodology of making it real nowadays. We are in a phase where the means of production is in the hand of the artist. Most people have laptops and you can create amazing sound art works on a laptop.

Do you think the pandemic has changed our relationship with sound and music?

I think people probably appreciate it more because they’ve had more time to spend with their passions – anything that is delivered online - going down rabbit holes on YouTube or Spotify. A lot of people have got into audio books and podcasts. I think people are more willing to listen to a variety of different things. I think people have become even more eclectic in their tastes.

As part of our response to the pandemic we are creating a music map of the UK, commissioning artists to celebrate communities and asking the public to share tracks that have special meaning for this time. What track would you share on the music map and why?

I have always loved the idea of creating a soundtrack to your life as you walk around, so I wouldn’t link it necessarily to one location but what has accompanied me a lot during my lockdown walks – strangely enough - is Renaissance and Baroque music. Things like Thomas Tallis and John Dowland – I’ve been digging deeper into the DNA of why I like certain types of music and I’ve found I really like Baroque music so it must be somewhere down there in my ancestral memory somewhere.

If I had to choose one, I would say Henry Purcell When I am Laid in Earth. I defy anybody who has a soul not to have a tear in their eye by the end of that song. It is the most beautiful lyric and music – and I would attach that to my walks in Regents Park.

What are your hopes for music and its audiences in a post pandemic world?

That people take their large scale consumption of music during lockdown and go and see performances live. I’d also urge people who aren’t really familiar with classical music or chamber music to try that out because it personally gives me a huge amount of pleasure. Not to regard it as a class orientated thing and just go and appreciate the music. In terms of new music, I’d like to hope that new forms will emerge from the greater consumption of different types of music – more hybrids. I also urge people to support artists as they are really struggling at the moment.

To find out more about Martyn’s work, visit his Illustrious Company website and follow him on Twitter. And do check out Martyn's fantastic podcast series, Electronically Yours.