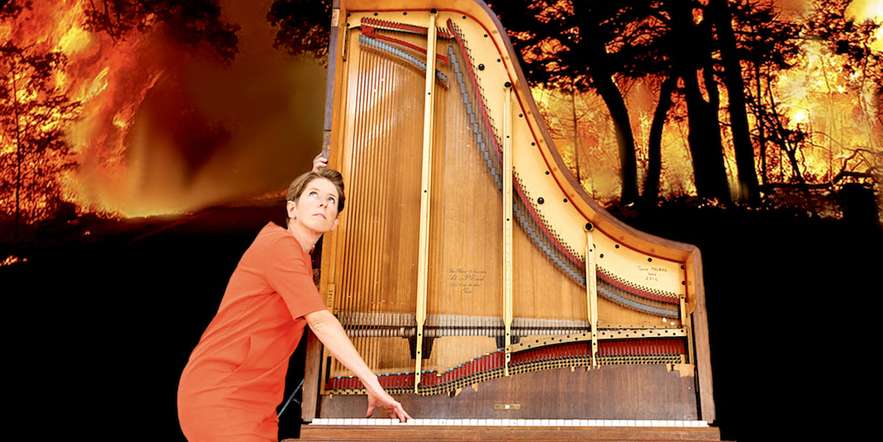 Sun 5th January: When I wrote this work, climate news was not part of our daily language or narrative. Currently, Australia is experiencing its worst ever bushfire season – most hectares burnt – and it is only the beginning of that season. It is thought 500 million animals may already have died. Massive floods have killed tens and displaced thousands in Indonesia. Flash floods in Israel have killed people. Fishlake in the UK experienced traumatic flooding before Christmas. The Amazon has seen a catastrophic increase in fires. The Thwaites glacier is retreating much faster than predicted. The planetary situation has already changed beyond recognition since we were first alarmed at the IPCC report, the one where they said we only had 12 years left to halve emissions, to stay within the possibility of 1.5 degrees of warming. 1.5 would now be a good news story. The climate scientists seem now to be saying 3-4 degrees is likely by the end of the century if we carry on as normal. And are our leaders doing anything about it? Trump is doing his own political assassinations. Boris Johnson is on holiday in the Caribbean. #scottyfrommarketing really seems to be doing almost everything he can to look the opposite to an empathetic human being, let alone leader.

So, what of my characters? What of my story? Last year, I was experiencing shock and discovery. I was going through utter surprise, disbelief and then, quite quickly, grief. Now I don’t feel surprised at all but I do still feel anxious as the numbers seem to rise against us. 4 degrees by the end of this century would seem to confirm my personal darkest fears that our kids shouldn’t have her own children. The world would just not be safe enough. So, no time to give up, then!

If the aim of my show is to move people along a notch, help them think, give them time, educate a little but also inspire, then how best to do that? In the first rendition, Fran goes on her own journey. She is quirky, funny, a bit ridiculous but ultimately just a normal woman, living as best she can and enjoying the current luxuries which seemed, until about 18 months ago, fair enough (if you could afford them) and spoken about without concern: flying to exotic locations, eating meat, buying luxury without questioning the provenance of it. Some of this almost seems old hat – but is that only to me? I read an unusual amount of environmental news. What is a ‘normal’ level of perception? Most people have surely now heard of Greta (apart from the actress who answered “Sharon” in the BBC quiz show!): when I first began writing her track, she was not the icon she is now, with her little book at every Waterstones’ Christmas till. Many in the UK probably saw David Attenborough’s Climate Change: The Facts and most will also have seen the Extinction Rebellion protestor being pulled from the roof of the tube train (how one man wrecks a movement.. but that’s another story).

So, don’t my characters need also to have moved on, then? Can Fran still exclaim that Extinction Rebellion sounds like a heavy metal band if even my mum has heard of them? And in a horrible parallel, even the Camp Fire in Paradise has found a new update as the Australian fires approach Eden.

So, how will I update the phone calls between Fran and Lara? How will their different levels of involvement in the climate crisis still ring true but in the newer context of 2020, not 2018? And will the new headlines that I insert sound even worse than the last ones, or more of the same slide into apocalypse?

One thing is sure. I now have a lot more experience of what happens after people decide to engage. Although many will have only seen the disastrous XR tube protest, I took days out to witness a lot of very thoughtful and passionately delivered protests in London, where people not only put their bodies on the line but also collected in groups meaningful to them: professionals for XR, scientists for XR, even nursing mothers for XR who blocked the Google offices. I’ve also experienced first-hand the very direct and personal connections which are springing from a new shared purpose. Like a crowd appearing from nowhere, the amount of people globally who are calling out the climate crisis and their demand that we face up to it and do radical things right now are all seeing and finding each other and this is creating an incredible connectedness. I have a lot of new friends, despite actually being a very reticent protestor myself (I prefer to interview people, make music and attempt to talk to strangers about it all, rather than directly face off to the police).

I hope I’ll do Fran, Lara and Aidan justice, then. But part of me just really isn’t ready to change Aidan yet. I don’t think he’s actually ready yet, either.